What is Green Tea?

The definition of green tea in it’s simplest and most generalized form is a tea that is made up of leaves that were prevented from oxidizing, shaped and then dried.

However, green teas are not unoxidized. No tea is truly unoxidized because tea leaves begin to slowly wither and oxidize the moment they are plucked, something that is unavoidable since hours may elapse from the time of picking to the time of processing. So let’s draw a line here and speak only of controlled processes.  The most prevalent form of green tea production involves heating the leaves shortly after plucking (some green teas are allowed to wither for a short time before this), a controlled process that prevents the leaves from undergoing any additional oxidation. Heating the leaves denatures the enzymes in the leaves responsible for oxidative browning, preserving the green color of the leaves and halting the myriad of chemical reactions taking place as a result of oxidation. When heat is involved the process is called “kill-green” (from the Mandarin shaqing which means “killing the green”) and is typically done over a heated wok, in an oven, on a bamboo basket over charcoal, or by steam. With sun-dried green teas, oxidation is halted not by heat, but by dehydration. 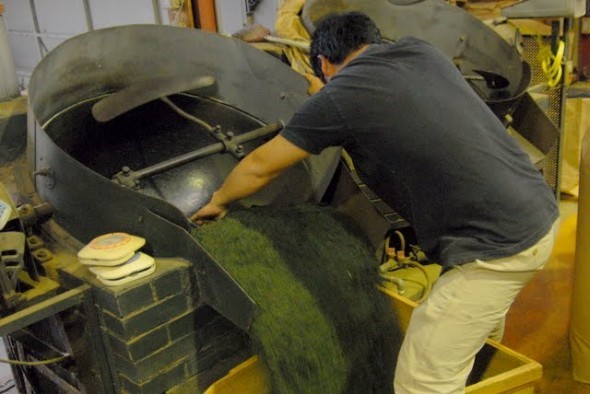 Some green teas may be withered for several hours before oxidation is halted. In doing so, the vegetal characteristics of the tea are reduced and many new aromatic compounds are formed.